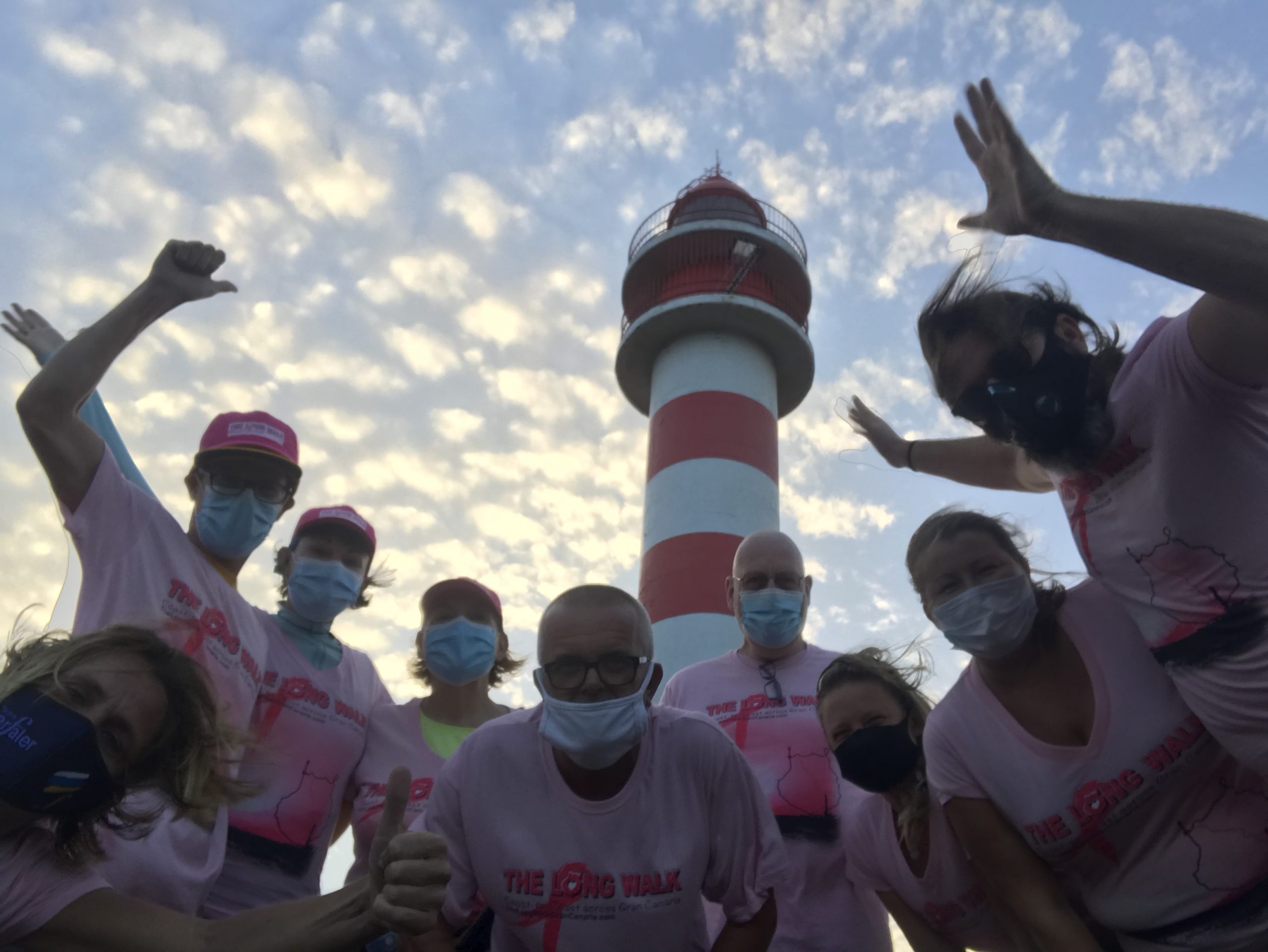 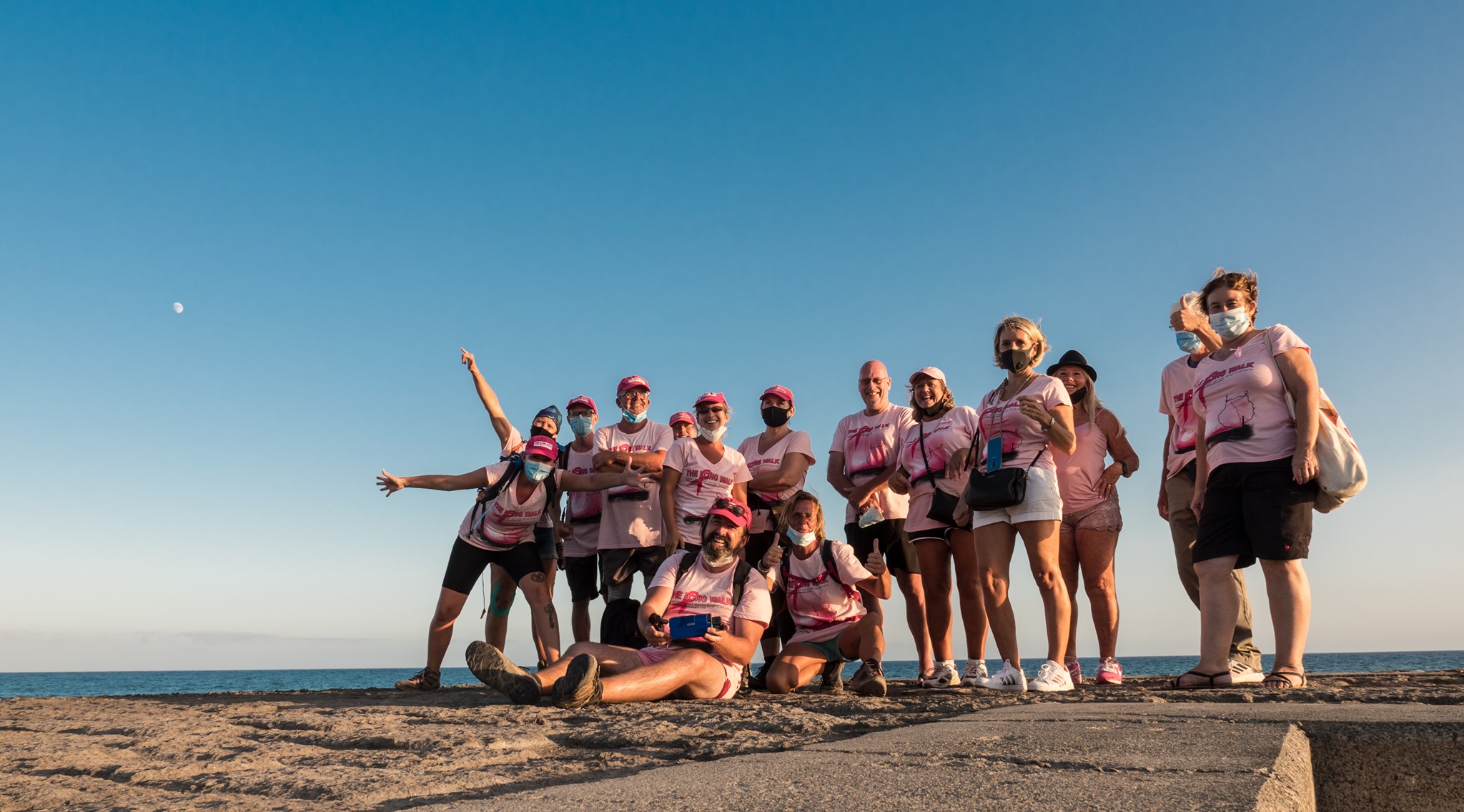 … and at the pier of Faro de Maspalomas at the end of the walk.

The Long Walk is the annual coast-to-coast charity hike across the beautiful, sub-tropical island of Gran Canaria. We raise funds for our local causes and charitable organisations on the island, helping those we can to overcome challenges.  The event itself also provides unparalleled opportunities for team building, personal development and direct community action while negotiating a great sub-tropical wilderness in a safe and motivating environment.

This walk simply demonstrates that together we can all cross mountains, one step at a time.

Individuals and local businesses join us for some or all of the walk, spearheaded by founding participants TUI Travel, The Canary News, Love Gran Canaria, Blue Explorers Dive Centre, 45photos, Ary Traduciones and many others who have joined us along the way like Music Hall Tavern, Spirit of The Sea, Sparkles Showbar,Personal Trainer Lilly Rikhter, Gran Canaria Natural & Active and members of the Gran Canaria Walking Festival.  This is much more than hiking!

Yes Together We Can!

Now in our ninth year, The Long Walk travels coast-to-coast across the subtropical island of Gran Canaria, crossing its highest peak, to help inspire others to raise funds and awareness for worthy local causes, supporting sufferers, and importantly their closest family members, in understanding how to survive and conquer serious illness and life challenges affecting men, women and children of every age.

Together we can do this!

We are very proud, once more, to be joined by adventurers from the resident English speaking community, visitors and various businesses to raise funds and awareness for these most worthy causes.

We encourage participation in as many ways as possible, whether that is sharing information, collecting sponsorship, promoting involvement or walking with us for the entire 3 day journey, just one day, a part of one day or simply cheering us on at the finish line.

We can´t do this without you.

Our message is simple:

There are times in everybody’s life we each face difficulties.

Keep Going. Never Give Up. You are not alone.

Stay focused on the beauty all around you.

Together we can cross all mountains, one step at a time.

We want to highlight the struggle faced by anyone fighting an uphill battle, or who has ever been diagnosed with a life threatening illness, and the importance of supporting them as a community, as well as those nearest to them, helping them overcome their own personal mountains or challenges.

YOU are not alone.

In 2011 an initiative from Gran Canaria's local English-language newspaper The Canary News, Views & Sunshine, El Periódico Inglés de Gran Canaria, led to a successful campaign to raise money for the local breast cancer association. Various readers from the community got involved and were inspired to create events and performances to encourage fundraising for this very worthy cause.  That year we exceeded our 1000€ target, donating more than 20,000€ to the ACCM at time when they were most in need.

The Long Walk was first founded in 2012 to support local fundraising activities among the community in Puerto Rico, bringing together two adventurous souls, Edward Timon & Sanna Nevalainen, after they made a promise to walk from Puerto Rico, on the south coast, to the famous land mark Roque Nublo, in the centre of the island, if the Puerto Rico fundraisers were able to exceed their target one more time, furthermore offering to double the distance and walk to the island's opposite coast, and the capital Las Palmas, if they managed to raise 2,000€ or more.

With the help of the English newspaper, and the support of English speakers on Gran Canaria, these adventurers left Puerto Rico with 7 others who escorted them through the night to the mountain village of Soria, and the duo finally made it to Roque Nublo, having walked nearly 50km straight, after 18 hours of roadways, trails and rough terrain. They fell in love.

The outstanding TUI Travel team, led by Mr Paul Gilliam, joined the effort the following year, as part of their annual fundraising efforts in their work on Gran Canaria to complete the promise of a coast to coast walk. Under TUI´s leadership, guidance and commitment the TUI team, and their area manager for The Canaries, Niel Heyhoe,walked with us from Maspalomas to Las Palmas, in an inspirational event that raised thousands of euros.

Several other participants joined The Long Walk for the rest of the hike coast-to-coast, including Paul and TUI's then destination services manager Jane Rasmussen, not only making it to the summit of the island but then back down the other side to the capital Las Palmas for a celebration at The British Club of Las Palmas.

Since then the event has grown from strength to strength, with a new route every year, from the north to the south, finishing at the Dunes of Maspalomas and in 2018 arrived to where this all started, at The Pub in Puerto Rico. There the Long Walkers were met by supporters and sponsors, local politicians as well as business people of every nationality.

A big shout out should go to some our most persistent supporters and participants Blue Explorers Dive centres have sent an epic threesome every year to join us every step of the way, Julia, David & Sabrina, Afrikat have never missed an opportunity to support us financially and emotionally, Music Hall Tavern have always been eager to don a posh frock in our honour, as have Sparkles Showbar, and the Spirit of The Sea have consistently shown a spirit of solidarity with our cause. Some of TUIs finest managers and those climbing the ladders of success have returned to us year after year, notably Celina proving there is nothing dull about Belgian girls and Mr Michael Wheatly and of course the indomitable Andy Joyce, two times Long Walker... there are many others besides...

The Long Walk and associated events, over the last eight years, including the wonderfully successful Caminata Contra El Cancer, in Maspalomas and Puerto Rico Walk, have led to more than €100,000 in donations directly to local charities, and in particular the local breast cancer association, and this in turn has spawned many other fund raising events throughout the English speaking community.

In 2017 we widened our scope, exploring the creation an official association to continue this great work and looking to include various local charities in our event.  We hope you will join us for 2020.

HOW CAN I PARTICIPATE

There are a number of ways you can take part.  If you want to register for The Long Walk we require you to find a minimum of 200€ to cover accommodation, food and insurance.  This must be paid before we can officially recognise you as a prospective Long Walker.

Thereafter we ask you to aim to raise as much money as you can, by letting the world know that you plan to walk over a mountain, through a wilderness, from one side of an island to another.

Your target is 1000€, but we are not so strict on this, whether you raise more or less than that figure we know that you will have positively changed the world just by joining us on our journey.  Every penny you raise is to add directly to the donation going to the charities, we want to ensure that as many people as possible know about your epic undertaking and commit to supporting the effort.

The Long Walk ( 3 Days ) : per person - This initial 200€ will need to be paid prior to confirmation.  You can have your accommodation sponsored for you to walk, but this needs to be clearly stated to the sponsor.

As well as walking you can become an ambassador for the event: donate, find sponsors, help to promote the event, meet us at the various points along the route to cheer us on and of course buy one of the event T-shirts, 100% of the profits from which go directly to the charities

A great way to join in is to get yourself sponsored to do a section of The Long Walk, even if you can't do all three days.  Every leg of the way, we travel through some of the most epic unspoiled wilderness in the world.  If you think this is something you might like to do, get in touch and we can help you plan for it.

TOGETHER WE CAN DO IT! 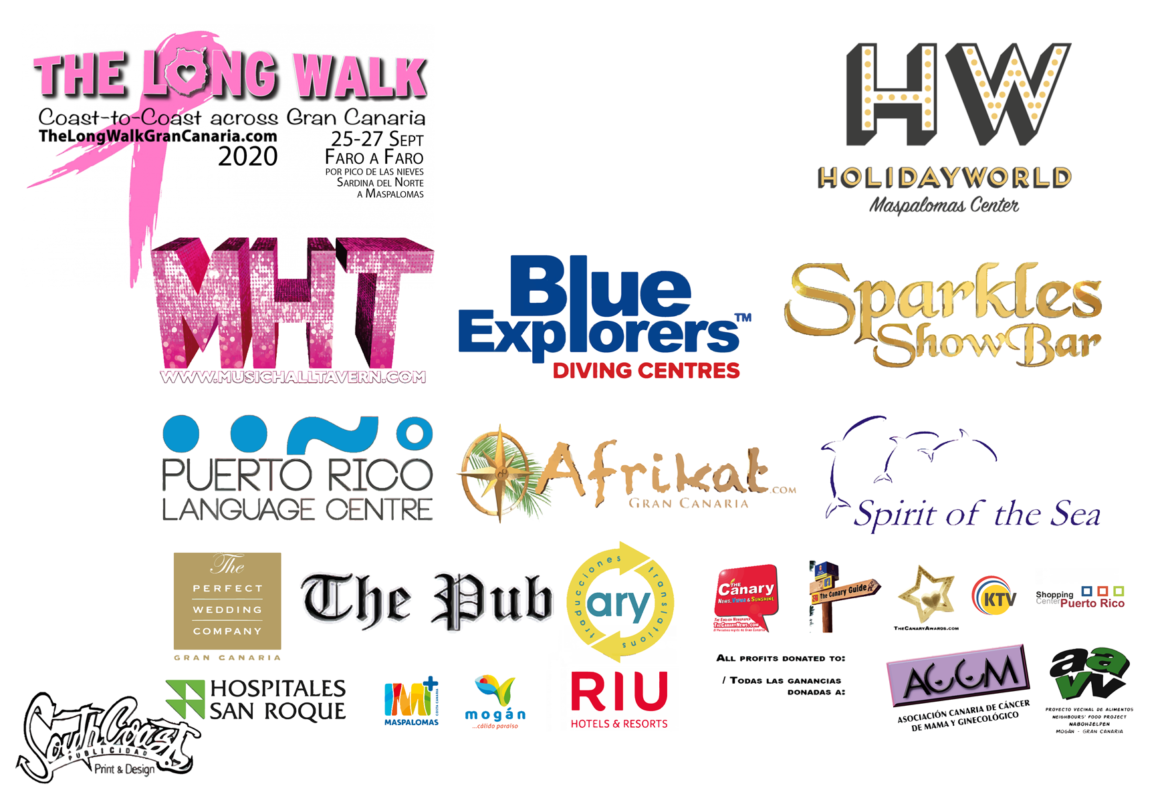